Brexit and the Futility of Modern Elections

The people can only wield political power if they respond harshly to disobedience. In Britain and other faux democracies, where election results can be ignored without civil unrest, the people no longer rule.

Britain, you may recall, has voted to leave the European Union. The separation was scheduled for this coming March 29 – two years and nine months after the vote. But Theresa May’s government decided to delay it, again, or maybe hold another referendum in hopes of getting a better result the second time around.

Britain, for some reason, is classified by think tanks and NGOs as a “Democracy.” There is, I suppose, a little merit to this title. After all, the elected legislature did get to vote on things like abortion and same-sex marriage, unlike in the United States. Nevertheless, the situation with Brexit shows that the British people’s claim on self-government is pretty weak, too.

Why, then, are modern elections so futile?

And it isn’t just Brexit. Catalonian independence came to nothing, even though no lethal weapon was fired to suppress it. In America, Donald Trump pulled off the biggest electoral upset in my lifetime – but very little of his agenda has come to fruition. Americans overwhelmingly voted against same-sex marriage when it came up on the ballot, even in liberal California. But they rolled over when the judges told them their votes were worthless. Again, not a shot was fired.

We like to say that in America and other ‘Democracies,’ the people rule. Well, they don’t. Real rulers don’t tolerate their decrees being trampled upon. Actual political power requires a forceful response to disobedience.

Imagine if, two centuries ago, Britain had voted to leave an international organization, and that organization didn’t respond by removing its officers from British soil and vacating its British posts. The British people would have responded by rioting, setting fire to the organization's offices, and stamping out all residue of its authority.

When the Continental Congress voted, in 1776, to make America independent, they didn’t meekly wait for British courts to rule on the legality of what they had done. America’s home-grown representative houses had decided that they, not a distant Parliament, were the rightful rulers. Henceforth, rival authorities would be driven from the country by any means necessary.

If, in 1815, Federal Marshals had arrived in a small town in Kentucky in order to arrest the county clerk for refusing to marry same-sex couples, the Marshals would have gotten tarred and feathered - in an optimistic scenario. Very optimistic.

When the Supreme Court tried to settle the slavery issue in 1857 by a 7 to 2 vote, Americans refused to let the Justices have the last word. Abraham Lincoln was fairly straightforward in his thoughts on the matter: “If the policy of the government, upon vital questions affecting the whole people, is to be irrevocably fixed by decisions of the Supreme Court... the people will have ceased to be their own rulers.”

There was no similar resistance when the Supreme Court settled another issue by a 7 to 2 vote in 1973. It is clear that the people have ceased to be their own rulers.

A ruler that allows itself to be disobeyed is not a real ruler. The people do not rule today in America, or in Britain, or in most of the Western world.


The only real check on government overreach is a willingness, among the common people, to revolt if the other checks and balances are ignored. That check has been missing for a very long time. 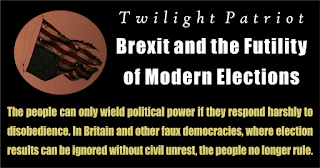